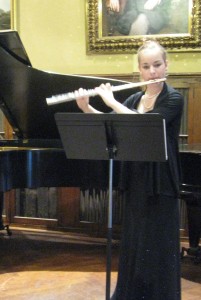 Heather Pulkowski is a flute performance major (class of 2012) at The Hartt School of Music, where she studies with Janet Arms.  She plays flute in the Hartt Symphony Orchestra under Christopher Zimmerman, and has also played in the Hartt Wind Ensemble under Glen Adsit.  As a freshman in the fall of 2008, she was named one of six finalists in the Van Rooy Competition for Musical Excellence at the Hartt School.

Ms. Pulkowski is a former flutist with the Boston Youth Symphony under conductor Frederico Cortese, and the New England Conservatory’s Youth Philharmonia Orchestra under Benjamin Zander.  With these orchestras, Ms. Pulkowski has performed in Boston’s most historic venues, including Symphony Hall, Jordan Hall, and the Sanders Theatre.  In the summer of 2008, Ms. Pulkowski participated in a concert tour of Germany and the Czech Republic with the Boston Youth Symphony.  At the age of sixteen, she won the BYSO Repertory Orchestra Concerto Competition, playing the Nielsen Flute Concerto from memory.  In the spring of 2007 she performed the concerto with orchestra at the Tsai Performance Center, receiving a standing ovation from the crowd.

Ms. Pulkowski has been selected to perform in Flute Masterclasses for Jim Walker, Doriot Anthony Dwyer, Bonita Boyd, Bradley Garner, Marco Granados, and Suzanne Gilchrest.  In January 2010, she received an invitation to train at the Boston Flute Academy, where she studied flute performance with Judy Grant in the Young Artist Program.  She also began studying teaching methods in the BFA Teacher Training Program.  A native of Massachusetts, her first flute teacher was Shan Liu at the Indian Hill Arts Center.