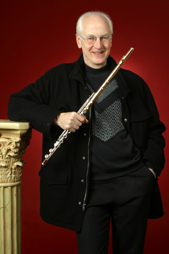 The Boston Flute Academy is honored to have had BSO flutist Fenwick Smith on our flute faculty for seven years, beginning in Fall 2010.  Our students of all ages enjoyed many Master Classes and private lessons with Mr Smith, along with semester long courses for advanced players on how to take successful orchestral auditions.  His insight, intelligence, thoughtful interpretations, and amazing demonstrations made a lasting impact on all our BFA teachers and students.  Mr Smith has passed away but we keep this page here to honor his legacy and distinguished career.

As a former faculty member of the New England Conservatory, where he was a studio teacher and chamber music coach, Mr. Smith was the recipient of NEC’s Laurence Lesser Award for Excellence in Teaching.  Fenwick Smith was Visiting Professor of Flute at the University of Michigan School of Music for the academic year 1997-98, and has presented masterclasses in China, Japan, Europe, and across the United States.  His presence is greatly missed.   Please check out his exquisite recordings.