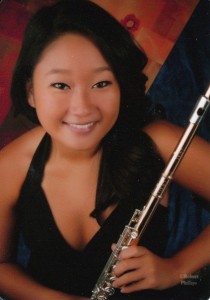 Sarah Shin is native of Ames, Iowa, where started playing flute at age 9.  She then moved to Natick, Massachusetts, where she attended Walnut Hill High School, a local arts school.  There, she studied with Judy Grant, founder of Boston Flute Academy.  Ms. Shin was principal flutist of the Boston Youth Symphony Orchestra, where she performed in Symphony Hall and played with famous cellist Yo-Yo Ma.  She then went on to Carngie Mellon University, class of 2012, and began studying under Jeanne Baxtresser and Alberto Almarza.  She has attended music festivals such as Interlochen (with a full scholarship), Northwestern High School Music Institute, ARIA Music Festival, and Colorado College Chamber Music Festival.  In college, Ms. Shin has played as a featured soloist with the Carnegie Mellon Wind Ensemble, and was one of the founders of the Carnegie Mellon Flute Quartet.

Listen to Sarah Shin perform the Chaminade Concertino, as a high school senior