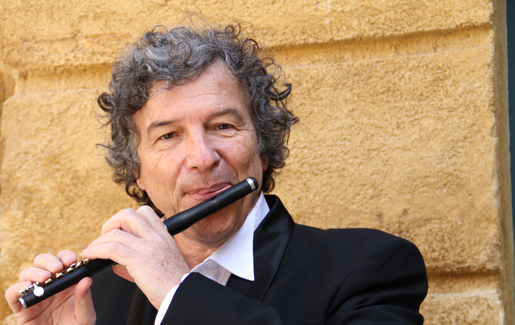 Click here for PDF details of piccolo repertoire to be performed:   Jean-Louis Beaumadier

By public transportation, take BUS 39 from Boston, and get off at Perkins Street in Jamaica Plain.  Walk 15 minutes straight down Perkins, past the Jamaica Pond, to the Maliotis Center, on the campus of Hellenic College.

JEAN-LOUIS BEAUMADIER is one of the foremost representatives of the piccolo in the world.  He studied flute with Joseph Rampal at the Marseille Conservatory and continued his studies at the National Superior Conservatory in Paris under the stimulating teaching of Jean-Pierre Rampal. Following his studies, he performed as piccolo soloist with the National Orchestra of France for twelve years, during which time he performed under the batons of such renown conductors as Sergiù Celibidache, Leonard Bernstein, Lorin Maazel , Seiji Ozawa, Karl Böhm, Pierre Boulez, and others.

Much in demand as a piccolo soloist, BEAUMADIER performs in Ireland, Israel, England, the United States, Belgium, Germany, Senegal, Croatia, Spain, Austria, Brazil, and Italy, as well as over one thousand concerts throughout France. He also performs frequently as soloist on radio and television.

BEAUMADIER has recorded twenty CDs, including International Grand Prize Winner of the Charles Cros Academy for his disc, “Concert Pour Un Kiosque” featuring works of Eugène DAMARE (1840-1919) (Calliope Records 9869 Harmonia-Mundi) with the instrumental ensemble “la follia.” Concerning this recording, Aurèle Nicolet has written, Beaumadier’s “record is marvelous in sound, in technique, and above all in elegance and charm. It is a true delight!”

Regardless of musical demands or genre, BEAUMADIER takes the piccolo to greater and greater heights and has established himself as an artist beyond compare.

Jean-Pierre Rampal wrote about Beaumadier:  “Jean-Louis was my father’s pupil before becoming mine.  Endowed with marvelous technique, he stands out, thanks to his winning personality and his developed artistry. It is a joy to hear him in turn dream and turn pirouettes; he is the Paganini of the piccolo.”

“Jean-Louis Beaumadier is not only one of the finest piccolo soloists alive today, but also a remarkable musician. When he plays–whether a Telemann fantasia, the Bach Partita, Genin’s variations on ‘Carnival of Venice,’ or fiendishly difficult contemporary works by Damase and Donatoni, his listeners are first and foremost aware of the music. To hear and witness his virtuosity in person is an unforgettable experience.”    – Leone Buyse Veronique Poltz is professor of Composition and Orchestration, and a coordinator of the Musical Creations department at the Conservatory of Marseille.   Of Hungarian origin through her grandparents, Véronique Poltz was born in 1963 near Paris. She began the piano at age 6 at the Conservatory of Aubervilliers, where she obtained three first prizes: in piano, accompaniment and chamber music. In 1982, she received the medal of the Ministry of Culture. Véronique Poltz pursued her studies at the Higher National Conservatory for Music of Paris in the classes of specialized Music theory and Writing (harmony, counterpoint, fugue, instrumentation and orchestration), where she was awarded a First medal and three First Prizes. She perfected studies in piano at the music teachers’ training college A.Cortot, Paris, and obtained a first prize in accompaniment, at the city of Paris.

Véronique Poltz has composed works for solo instrument (piano, cello) as well as numerous duets for various instrument and piano, piano 4 hands, harp, as well as works for symphony orchestra, in particular ” Garden of the Shadows “, created in 2001 for the Orchestra Colonne in Paris, and also will be performed in 2015 by the Regional Orchestra from Cannes Provence-Alpes-Côte to Cannes. She realized arrangements of Johannes Brahms´ Hungarian Dances for two Piccolos and piano, which she gave in concert in Tokyo in 2012, and orchestrated Moto Perpetuo of Joachim Andersen for piccolo and piano, which was played during the closing concert of the 2009 National Flute Assn National Convention in New York. Recently  she composed ” the Beauties and the beast ” for harmony orchestra, created November 9th, 2013, within the framework of “it is not classic ” in Nice. V.Poltz recently composed a trio “Midnight with Pan” for piccolo, alto flute and piano, performed at the British Flute Society in August 2014, and “Icosa rhapsody”, for piano 4 hands, composed for Monaco’s 2nd international competition for 4 hands  which will be held December 2014. At the age of twenty-five, Brendan V. Ryan is an exciting up-and-coming flutist who has performed in concert halls across the world. Mr. Ryan was a First Prize winner in the 2013 Alexander Buono International Flute Competition and was thusly offered a solo performance in Carnegie Hall in October of 2013. He is originally from Needham, Massachusetts, and graduated with honors from the University of Southern California in 2012 with a Bachelor of Music degree. At USC, Mr. Ryan studied with Jim Walker, prolific studio musician and former Principal Flutist of the Los Angeles Philharmonic. Mr. Ryan also spent a year at Carnegie Mellon University where he studied under Jeannie Baxtresser, former New York Philharmonic Principal Flutist and Alberto Almarza. Mr. Ryan completed his Master of Music degree at the University of Texas at Austin, where he studied with soloist and former Boston Symphony Orchestra Acting Principal Flutist, Marianne Gedigian. While in high school, Mr. Ryan studied with Boston flutist Judy Grant.  He is currently the Artist-in-Residence at Boston Flute Academy.  In addition to his life as a musician, Mr. Ryan has a passion for theatre performance, reading, and baseball.