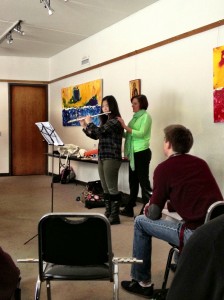 Boston Flute Academy enjoyed another fun-filled and educational weekend! This weekend, BFA hosted a body mapping workshop by flute faculty member at the Longy School of Music and body mapping specialist, Vanessa Breault Mulvey, and a mini-recital by graduate student of Paula Robison at the New England Conservatory and finalist of the 33rd Annual James Pappoutsakis Flute Competition, Alicia Mielke.

Following her presentation, Ms. Mulvey analyzed several BFA students (Ned Martenis, Issac Alter, Gretchen Herdrich, and Yumi Lee) while they performed short musical selections. She then suggested various tools and advice, taken directly from her workshop, to help each student with proper alignment and balance as they played. Audible and visual improvements where noticed immediately by the students as well as those in attendance!

After Vanessa Mulvey’s enlightening presentation, BFA students attended a mini-recital by Alicia Mielke.  Alicia performed repertoire from her up-coming NEC graduate recital program including Reverie et Petite Valse by A. Caplet, and Violin Sonata No. 1 by G. Fauré with pianist Dr. Christina Wright-Ivanova. During her spoken program notes, Alicia shared that she felt that the violin part of the Fauré Sonata is so comfortably transferrable to the flute that she could read directly from the original score!

As always, photos from this weekend’s events can be found on the Boston Flute Academy website at http://www.bostonfluteacademy.com/photos/

← Highlights from Masterclass and Recital with Nina Assimakopoulos
Paul Edmund-Davies Masterclass →
Logging In...